All things electrical for the industry

All things electrical for the industry

MeterBoard locations - (4.18.3)
I've noticed on a lot of new builds that the MeterBoards are within the Hazardous Areas for Reticulated Gas Supply Regulators (photo Attached)

Maybe the Gas Fitters are piping out the houses after the place is pre wired??

My question is - Does this responsibility fall on the Inspector if the MeterBoard (that contains Mains) is within the hazardous area?

Also the same question with regard to Main Earth Pins.

My guess is Earth Pin Location is the Inspectors responsibility - but maybe a grey area for MeterBoard location?? 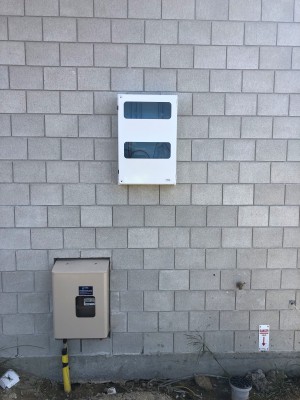 At the very least it's non-compliant, if the electrician has supplied a COC that says it it compliant the been on the prudent side the inspection should be failed as technically it is a false declaration.

The argument could be that the gas stuff wasn't there when the meter board went in, it may be true but what is there at the time of inspection is what counts. How it gets sorted out is between the electrician and the person paying for the work, just fail it and tell them to fix it and get the inspector back.

On the flip side if the inspector was to pass this and something happened I'm sure worksafe would come knocking on the inspectors door asking for a please explain......
Top

Greg's right that if something went wrong later, Worksafe will be after the relevant inspector.

We know that EWRB have a policy that the Inspector is responsible for checking the validity / correctness of CoCs relevant to the HRPEW thar is being inspected. Info on Worksafe website indicates they have a similar attitude.
Based on the concept that certification is part of the work.

That concept is not supported by the wording of ESRs.
True certification of PEW is itself PEW (under Sched 1); but it is listed separately.
In exactly the same way that inspection of PEW is listed separately.
Inspection must be done by someone who didn't do the PEW. Similarly certification may be done by someone who didn't actually do any of the PEW.
So it's entirely logical that the ESRs have been written to treat installation, certification installation, and inspection of installation as three separate acts of PEW. Which are followed by a 4th - connection to supply + issuing ESC.
Therefore certification must, legally, be treated as a separate act of PEW from the installation of fittings that's being certified.
And that separate "certification" PEW is not classed as high risk PEW by ESR 6A.
Therefore there is no legal basis for claiming that an inspector must check not only the installation work but also the certification of that work.

However while I have no doubt that the EWRB / ES interpretation is absolutely wrong, and that if it came to a court case this interpretation would fail; you only get there on appeal, and after going through a EWRB disciplinary hearing that is certain to uphold it.
So unless you feel like spending heaps of time & money on proving the point, best to include the certification in the scope of your inspection.
As Greg says; be prudent.
--------------------

A "mains work" inspection typically includes both work on "mains" and work on the "main earthing system".
The "mains start at POS and end at MSB; at line terminals of "main switch" for Active(s) and at neutral bar for Neutral.
So the intrusion of those conductors into a hazardous area is certainly relevant. Especially when they are not just passing through, but are terminated onto fittings. How that works depends partly on
The contents of a typical metering enclosure certainly constitute a "source of ignition" for purposes of 4.18.2 WRT gas bottles.
However a connection to an earth electrode can't properly be regarded as a source of ignition.
For gas meters / regulators, 4.18.3 says the metering simply can't be anywhere in the zone.

In both cases, remember that these clauses have been amended post-publication by Schedule 2 of EST, so we actually don't need to consider whether or not a particular item is a source of ignition . If an electrical fitting (which includes a conductor) is not directly associated with the gas supply, it simply can't be in the zone. (There's a reference on the citation for 4.18.3 to "metering equipment". This allows for combined gas metering that has electrical components, it's not an all-clear for electric-only meters to be in zone).
-----------------

If the gas comes after the electrical then there was no Zone - and the electrical work was compliant - when installed. End of.
The CoC certifies the work was done lawfully and safely ; ie it complied at the time.
The relevant time being when the work was done, not date-of-issue of the CoC.
Inspection is of the PEW as it was done, not of the installation as at some later time.
So the inspector can't validly apply later facts to inspection of PEW.

That said, these rules WRT zones around gas equipment originated in AS/NZS 5601.1; so if the electrical was there first then the gas installer has failed to comply. (Although the electrode or a cable just passing through would be OK as "5601" only worries about things that could be a source of ignition).

Either way, someone has stuffed up, creating a risk of explosion.
The conflict doesn't just suddenly emerge at inspection time. It should have been sorted out at first-fix; regardless of whether pipes / wires arrived first. Installers on both sides should be aware of the possibility, and should be asking questions at planning stage.
The whole point of inspection is to avoid such unsafe stuff being connected to supply; so I certainly wouldn't issue a "pass" RoI.

Is that meter board in the zone?
Isn't the zone 1600mm high from ground level?
The blocks are 200mm high (210mm?), and there are 8 of them under the switchboard.
I can't see the earth electrode in the photo?
Top

I've attached a screenshot from Vector's gas meter installation zoning and below is a clip from Worksafe on electrical work near gas installations.

" Natural gas meters
The New Zealand standard for gas distribution systems (NZS 5258) also specifies hazardous areas around gas meters (in Appendix J). For a natural gas meter with a venting regulator the interior of the enclosure is Zone 1 and an area of at least 0.8 m horizontally from the service riser (inlet pipe) centre line, and at least 1.5 m vertically from the finished ground level should be classified as Zone 2. "

If the metering system has a regulator with an automatic shut-off the device the zoning of the enclosure remains the same but the external dimensions are reduced to 0.4 m and 0.8 m respectively. (There are also classifications for LPG gas meters). "

Looking at the meter box in the photo you've attached there is nothing wrong with the installation? I can't see an earth stake in the photo but with where the danger label is on the wall, if it's close to that, that would be OK too? 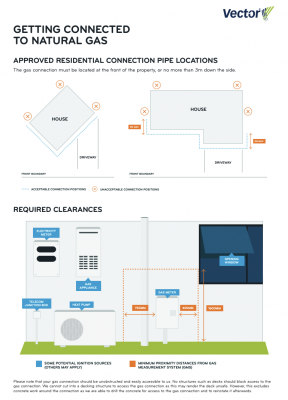 It was a few months ago now but I'm pretty sure the MeterBoard was within the Hazardous Zone (Below 1600mm from ground level and within the 800mmm across from gas riser).

In terms of the gas standards - I don't have access to 5601 or 60079 - but can they override what is said in 3000? I may be wrong, but I don't think they can. (Referring to the picture from Vector) If so , I feel like they would simply copy and paste from the Gas Standards. 3000:2018 hasn't changed any zone dimensions from 3000:2007, but goes further to state in domestic installations only electrical equipment directly associated with the Gas supply may be installed in the Hazardous Area.
Top

I don’t think one standard can override another one.

The authority of any Standard comes from where, and how, it is cited by another document.
The Standard may have a rule saying "shall" but that's only legally enforceable is the Standard - or the particular rule - is cited as mandatory in a regulation.

"5601.1" provides guidance on gas installations.
I assume (haven't checked) that it cited by the relevant regulations for doing gas work; which means gas workers must comply with it when doing work.
But it's not cited by ESRs, so it has zero effect on us doing electrical work.
That said, considerable effort goes into trying to ensure that we use the same zones as them.
Basically the gas fitter follows "5601", while the electrician follows "3000"; and there should be no significant differences.

The gas side talks about a "prohibited zone", while we refer to the same zone as a "hazardous area"; which keeps the language aligned with "60079" series (and with IEC terminology). But the zone's dimensions are identical.


On that point; "5601" prohibits any "source of ignition" from being in the Zone.
"3000" 's original takes the same concept, and adds some (electrical) examples.
The NZ citation avoids any arguments about what is / isn't / might be a 'source of ignition", by simply keeping everything out that doesn't have to be there.

That also gets around the (false) concept that 'there can't be a hazardous area in a domestic installation'.
Which arises from people misunderstanding the fact that the relevant Standard for classifying hazardous areas for gas [60079.10] states in its Scope that it doesn't apply to domestic premises.
However while it's true you can't declare a hazardous area around a gas bottle at domestic premises using "60079";
it's also true that "3000' declares one - and (surprise!) it exactly the same as it would be for non-domestic.

OK, so we have a hazardous areas without needing to find a zone classifier.
The citation also eliminates the idea that you can follow "60079" series installation rules within the Zone, eg by installing Ex-certified fittings.

You'll find the same thing happening for caravans in next "3001"; which takes the rules for "5601.2" caravan / boat gas installations, and re-works them for an electrical context.
Top
Post Reply
8 posts • Page 1 of 1